EXETER – The Wyoming Area Drama Club’s latest production, titled “Midsummer Jersey,” is a casual mix of old and new with a touch of tanned skin.

“I think the play itself was written that way because the main characters are Cookie and The Understatement,” said Wyoming Area director and senior Nina Minnelli. “I think this is definitely a Snooki and The Situation playoff.”

Written by playwright Ken Ludwig and released in 2011, “Jersey” opens with the director of Wildwood High School presenting Cookie and The Understatement to an auditorium of enthusiastic students on the last day of school. After the students ask about their marriage, the duo decide to tell the students about the unusual – and magical – day they got married.

The plot revolves around the wedding day of the Governor of New Jersey and the loves of four high school students (including Cookie and The Understatement) who mingle and make fun of a few mischievous fairies equipped with a love potion.

Bullions said she chose “Jersey” because she was a fan of Ludwig’s other pieces.

“I was looking for something that would be fun,” Bullions said. “He (Ludwig) wrote this specifically for middle school and high school students.”

The club has been preparing the “Jersey” since the start of the school year. While they said much of the rehearsal was filled with witty laughs and puns, some older people admitted it wasn’t all fun and games.

While many of the club’s students are familiar with “Midsummer Night’s Dream” and other Shakespeare works from the school, they said learning parts of the monologue required research and transcription.

“There’s a part of the ‘Midsummer’ dialogue interspersed, and then it gets into a more modern conversation,” Bullions said. “Plus, there’s actually a word-for-word dialogue in Pyramus and Thisbe in the ‘Romeo and Juliet’ scene.”

Club members believe that since “Jersey” is a concoction of classic Shakespeare and realistic, modern characters that audience members of all ages can enjoy and enjoy the play.

The students said that one of the most notable parts of the play is a reference to Brad Pitt and Angelina Jolie – or “Brangelina” – which can now be a bit ironic since their recent divorce petition hit the media big. public last month.

“This play was written in 2011 when Brad Pitt and Angelina were like the powerful couple, and now they’re not. So this line is still relevant, but just a little different, ”said Morgan Chesna, senior.

Minnelli said she hopes members of the public will see that the club can perform both old and new plays, and in a way that can be both fun and educational.

“That we can still stay classic and do very classic plays like a Shakespearean play but still appeal to our audience,” she said.

Bullions said she hopes the public will realize that even after all these years, Shakespeare is still relevant today.

“I mean, it’s Shakespeare,” she said. “It might be, you know, as one of the characters put it, a little ‘goose’ but that’s the story. It’s the story of teenage love, of not getting along with parents and all the confusion that comes with being a teenager.

About 50 club members will participate in “Jersey”, on stage or off stage. The club is also a troupe of the International Thespian Society and has previously won state titles for writing and performance. Over the summer, some of the club’s students traveled to Lincoln, New Brunswick to compete for a national title.

Proceeds from the play are donated to the theater club to help fund upcoming club performances, as well as to fund travel and transportation to competitions.

“All of the shows that we do, it raises funds for our next performance. So that’s how we’ll make our way,” Minnelli said.

The club’s next performance will be their spring musical in March.

Michael Vukavitch, back left, plays his role of Puck, addressing students playing magical fairies during a ‘Midsummer Jersey’ rehearsal on Wednesday. The club will present the play on November 12 and 13 at the Wyoming Area Secondary Center. 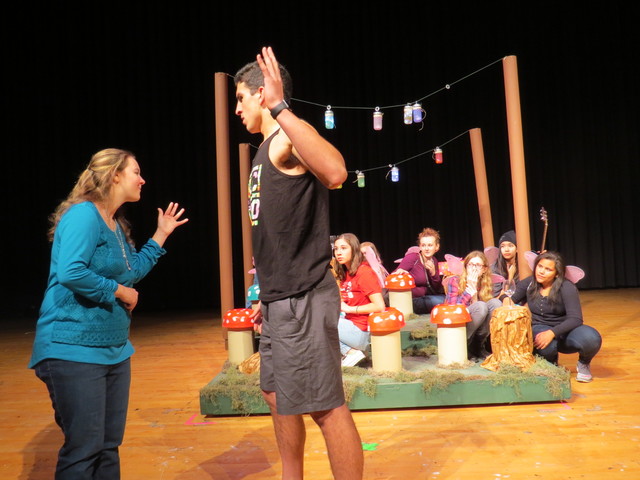 Wyoming Area Drama Club members Kristen Noss, left, and Dante DeLuca perform a scene as their characters, Titania and Oberon, while drama club members watch from behind. The club will present the play “Midsummer Jersey” on November 12 and 13 at Wyoming Area Secondary Center.